Ken Austin: Goodbye to a hero

Thank you for subscribing to the Business Matters Newsletter!
May 20, 2019 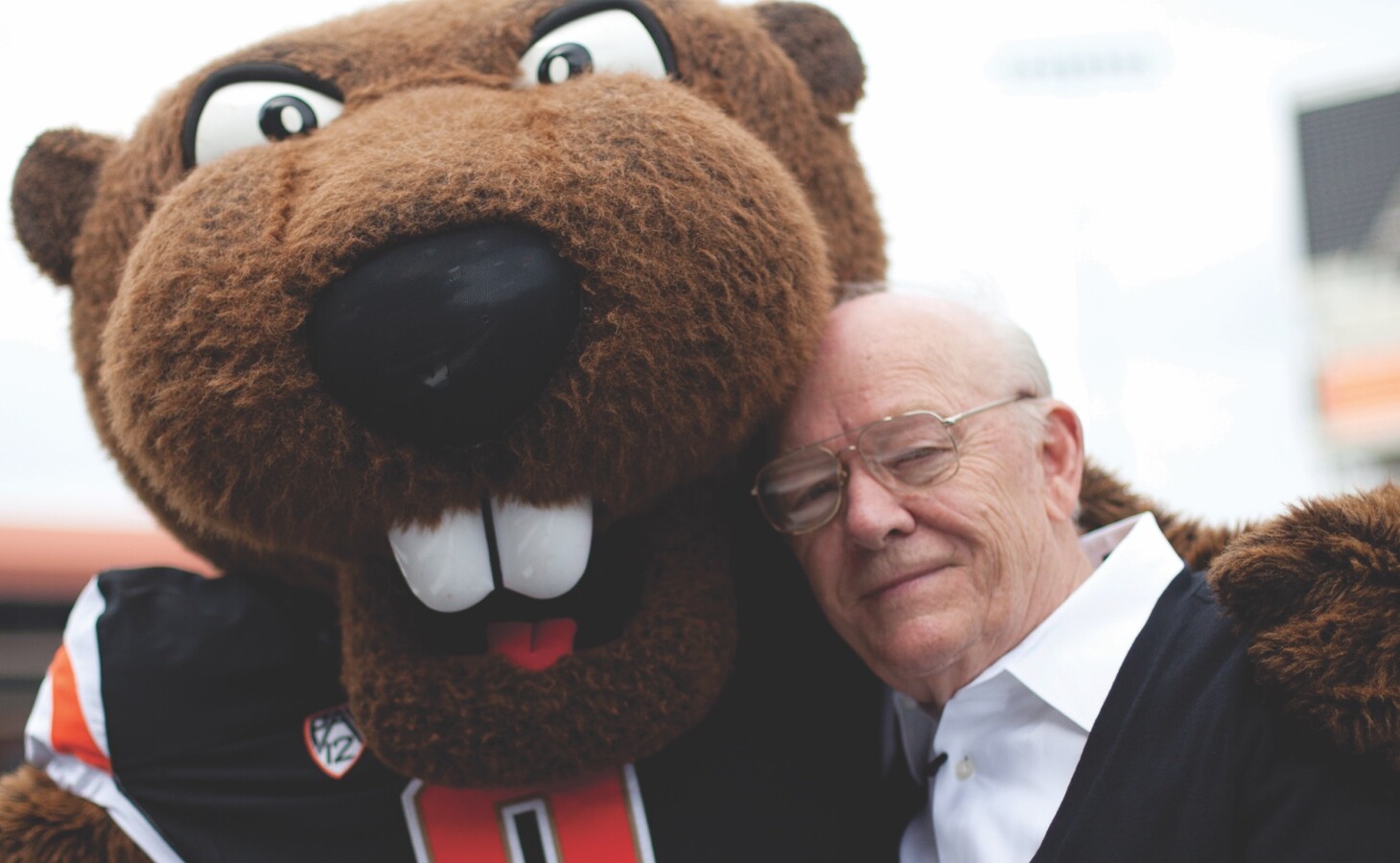 It was May 6, 2010, and Dean Kleinsorge was preparing for a champagne toast at the college’s annual awards dinner in Portland, and she was also waiting … waiting for the limousine rushing across town, bringing the Austins straight from the PDX airport to the college’s event. They signed their donation commitment papers in the limo, and caught the end of the dean’s champagne toast, with a wink and a quick hug. After the dinner, Kleinsorge announced the Austins’ lead gift to the building fund, and by the end of the night had raised another $501,000 while chatting at the bar. “It was one of the greatest nights of my life,” Kleinsorge said.

Great things tended to happen when the Austins were involved.

Ken Austin, whose passing on May 1, 2019, brought to a close the life of this extraordinary champion of Oregon State University and opened the narrative of his incredible legacy.

The 1953 engineering graduate, inventor, global business owner, and philanthropist was 87.
Ken and his late wife, Joan, were co-founders and owners of A-dec, Inc., a dental equipment manufacturer based in Newberg, Oregon. Their marriage, a partnership of business and innovation, proved to be profoundly impactful to the College of Business.

The couple made a $10 million lead gift for a new building for the College of Business. Their support launched the Austin Family Business Program and later the Austin Entrepreneurship Program, making Oregon State one of the first universities in the nation to establish a residential learning program focused on starting, incubating, and spinning off companies founded by students.

“Ken was a man of ideas, and Joan was a woman of business,” recalls Kleinsorge. “He constantly had a flight of ideas; his mind constantly was looking for a better way to do absolutely everything.” She reflects that their success with the marriage of business and innovation motivated their philanthropy.

The Austins supported communities far beyond Corvallis, always seeking to uplift the entire state of Oregon. Kleinsorge says many of their conversations over the years focused on the economy of the state. OSU’s reputable College of Business with a modern new academic home could help assure the state’s economic strength and future.

And these conversations took place at a point in time when 90 percent of businesses in Oregon were classified as small businesses and of those, 75 percent had four or fewer employees.

“They understood that the future of Oregon required an overall strategy to invest in Oregon’s innovators and business people because we are essentially a small business state,” Kleinsorge said. “You had to invest in education, and furthermore, family-owned businesses had to remain entrepreneurial and innovative in order to survive. Our motto was that there was a business side to every occupation.”

As a testament to the idea that Ken Austin’s investments support Oregon’s economy, Sherri Noxel, director of the Austin Family Business Program, reflects on the AFBP’s three decades of work to keep small business owners in Oregon agile and ahead of the curve. Noxel says that the family business program has reached thousands of business owners since its founding in 1985, and keeps an up-to-date database of close to 5,000 businesses.

“What has been most exciting for me is that I’ve now taught two second-generation family business students whose parents were enrolled in the family business class, taught by Pat Frishkoff, [founding director] when they attended OSU,” Noxel said.

Noxel shares her insights into the business and innovation partnership, and now the Austin Legacy: “Both Ken and Joan were so generous with their time in mentoring young family business owners that, I’d say, everyone in Oregon’s emerging generation of family business leaders has their own ‘Ken Austin’ story,” Noxel said.